From vgmrips
(Redirected from Sega MultiPCM)
Jump to: navigation, search 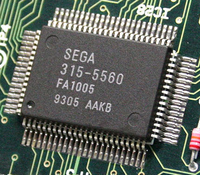 The Yamaha YMW258-F (GEW8, also called MultiPCM, Sega part number: 315-5560) is a custom sound chip made by Yamaha for use in keyboards and romplers, for example the TG-100. The chip was rebranded with Sega part numbers for use in Sega's arcade machines, namely the Sega System Multi 32, Sega Model 1 and Sega Model 2.

The sound chip shares similarities with an already existent sound chip made by Yamaha, the YMF278B used in the MoonSound. This sound chip has a total of 28 PCM channels.

The chip may have support for FM as well, but this is not fully understood and appears to not be used in any of the arcade games.

In Sega games, the MultiPCM is used with a Yamaha YM3438 sound chip (a CMOS version of YM2612), however, their purpose on these games are only for sound timer controlling.